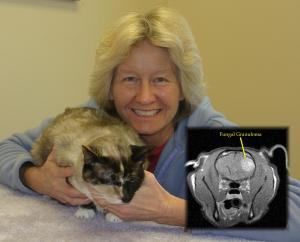 Simi lived in Arizona for 4 years as an indoor only cat before moving to Oregon. While there, Simi started becoming much more sedate, more quiet and sought out warm spots. Since it was December, this didn’t seem that unusual. But over the next few weeks, things continued to deteriorate. She became even more sedate, and sought me out constantly. Simi was always a “lap cat”–but this was definitely a change in behavior. My regular vet didn’t find anything abnormal on exam or labs–but we did NOT test for cocci. By mid-Feb or so, Simi started showing neurological symptoms: she was turning in circles constantly–only counter clockwise; appetite decreased; eventually losing control of her bladder function; gate abnormal, and one pupil was dilated. Chest x-ray showed a small lesion. We were referred to the neurologist for the head MRI, which showed the large tumor. Simi had neurosurgery that same day. The specialist suspected cocci when he saw the tumor–test results confirmed. Simi lost a lot of brain function with the surgery. She spent several weeks in ICU–very rough recovery period.Surgery was March, 2005, and Simi lived a happy and mostly healthy life until September 2014, when she died at 15 years old. Simi and Etta are Pet Hero’s!