Home » Happily ever after 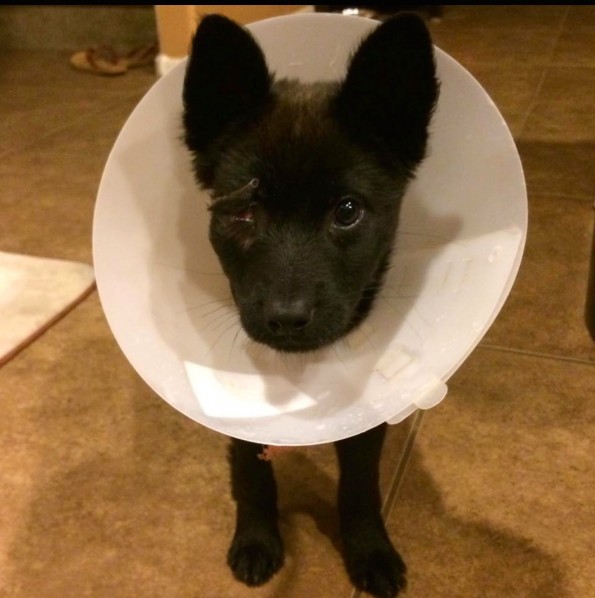 On December 15th staff at Animal Care Center stayed late. They stayed late not because a client had brought in a pet in trouble (though they have many times before). They didn’t stay late because they still had a lot to do even though it was after 5pm (which they often do). They stayed late to save a puppy. A puppy brought in by two young girls who found her being mauled by a larger dog.

The young girls had neither the means nor desire to take on a new dog, but they had to help her, so they brought her in to our hospital. The puppy was in trouble; a mere eight pounds, filthy and flea infested, her skull broken and her eye prolapsed (popped out) from the force of the bites she had received to her skull.

Doctors and staff, already involved in their own cases and busy with their own tasks stepped in immediately. Dr. Huang offered to do the anesthesia to try to save the puppy’s vision, and Tony offered to assist. The rest of the staff stepped in to pick up the slack.

Pain medication was given immediately, even as we were setting up the surgical equipment. Bloodwork was run and an IV catheter placed. Under anesthesia the puppy was radiographed and her eye placed back in the socket in an effort to save some vision in that eye. 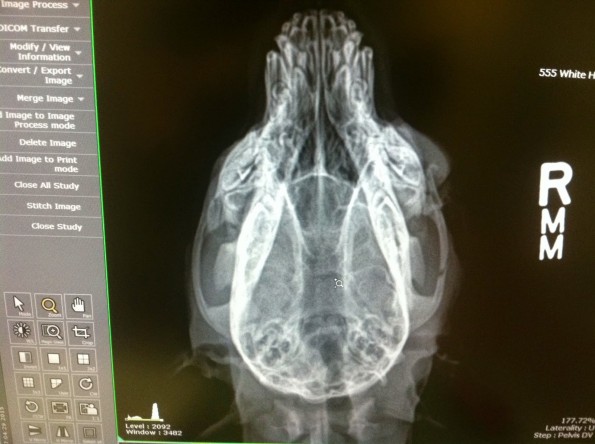 This is looking straight up at the skull, nose top

Well after we had closed for the evening, Dr. Huang, Tony and other staff members remained until the puppy was settled comfortably and offered water and given a warm place to sleep for the night.

The next morning groggy and happy she met our staff when they walked in. We took her for a walk, fed her breakfast, snuggled with her and provided her pain medications and applied eye medications three times a day.

She announced her extreme boredom with our hospital on the 17th, barking to be let out and wanting nothing more than return to her life of puppy play and chewing. She still had a lot of healing to do. The viability of the eye was still a question, and we were uncertain how much future surgery it might require. We began looking for someone to foster her off site so that she could have more time with people and being a puppy while still receiving regular medications and checkups. Several employees as well as clients offered to foster her until a permanent home could be found.

On December 19th her eye looked worse and it was decided that a tarsorrhaphy (sewing the eyelid closed) would help to protect the eye from further trauma. The puppy was once more anesthetized and her eyelid was sewn shut to better allow her eye to heal. 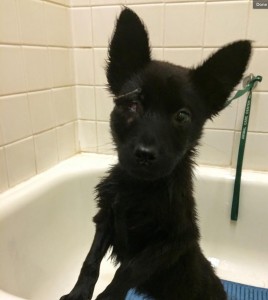 She went home with Carla our boarding manager on December 20th.  Carla gave her a much needed bath and a cozy home with fellow dogs. A Facebook post of her in the bath led to an offer of a permanent home, and the puppy received a name, Winnie.

Winnie is healing now, and she appears to have partial vision in her bad eye. She is a playful, inquisitive little puppy with tons of energy. She will remain in foster care with Carla until the middle of January when she will go to her forever home.

We want to thank everyone who stepped in, from the young ladies who first saw her, to our staff who offered their time and compassion, to Carla and Winnie’s new forever owners. 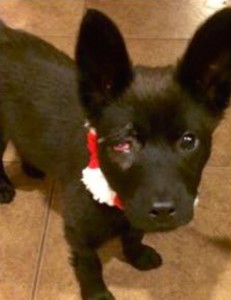