When to let go

Home » When to let go 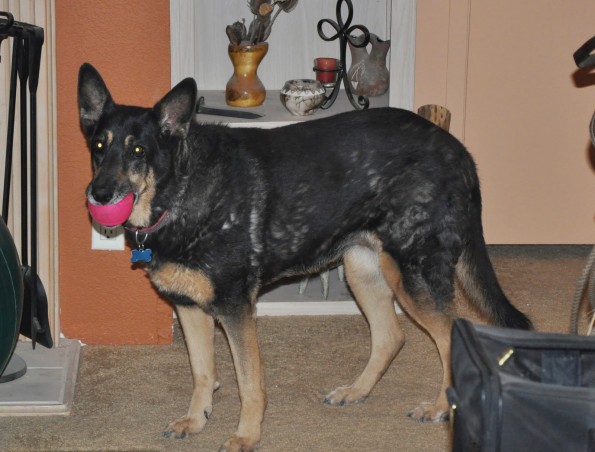 My mom called me the other day about her 14 year-old German Shepherd, Josie. She said that Josie was fading fast and she wanted me to be available to help her get Josie into the car when the time came to bring her in to see Dr. Humphrey.

I have been watching Josie fade for some time. She is happy and alert, but her spine is impinged, and though she has little pain she can’t control her hind legs well any more, she often falls and seems weaker at each visit. She is losing weight and muscle mass.

We talked a little while about how losing a dog to a physical ailment when they were otherwise fine was terribly hard and unfair. We talked about the details of euthanasia and the options available to my mom (home euthanasia vs. euthanasia with Dr. Humphrey) she decided that she would prefer to have it done at the veterinary office.

She told me it might be less than a week, that Josie was fading that fast. I told her again how hard her decision was. She told me that it was even more so because every morning Josie woke up and grabbed her favorite (nearest) rock and scampered through the house before settling into her morning routine of lying at my mom’s feet.

My mom said that Josie didn’t mind the falls at all; she would lose her rear end on a turn, fall down, scramble back to her feet and carry on undaunted.

I probed a little deeper, how often did Josie need help getting up? Was she soiling herself, was she still active in my mom’s life? It turns out Josie only rarely couldn’t get up, that she always made it outside in time, and that she still followed my mom, even down the insane stairs to the back yard.

I assured my mom that this was not a dog ready to let go. Sure she occasionally biffed when she was flailing through the house, she’s 14! She’s earned the right to crash a few times. But Josie was otherwise happy and still did many of the things that she used to do, even if they were modified to accommodate her weakness.

My mom was so terrified that Josie was suffering that she was placing her own very real and very human fears onto her dog. It is very easy to do this, and to be fair, it really is the most powerful tool we have when making these kinds of decisions, but they can sometimes lead us astray. My mom too is a bit older, and for her a fall is terrifying. Falls in the elderly are dangerous and scary. But clearly, for Josie this isn’t the case, she sees the falls as an unnecessary event intervening in her efforts to chase a ball or splash in the hose.

Knowing when to end our pet’s suffering is the absolute hardest decision that we as pet owners will ever make – we all hope and pray that our pets will live happily and die suddenly in their sleep in their dotage. Sadly, this is often not the case.

Sometimes we are lucky and fate forces our hand. I lost both of my last old dogs to sudden incurable cancer. There was one option left open to me, and in both cases I took it without hesitation.

Often fate isn’t so kind, and we pet owners are looking at a long-term irreversible decline with only one solution left to us, but the timing of that solution left very much in doubt.

Everyone comes to end of life decisions differently. For my mom, she was terrified that Josie was suffering, and that trumped all else. For others, as long as their pet still greets them with a wag or purr, then they feel that it is not yet time.

When you ask us what we would do in your shoes you have to remember that we too are individuals, perhaps some of us thought we waited too long for a beloved childhood pet and will never repeat that mistake again, for others the exact opposite occurred. Some of us will quit early to spare pain, while others will hang on to lengthen life.

This is why we hedge and mumble when you ask us what we would do. Yes, sometimes the answer is clear to us, and in those cases we will tell you, but in others we are just as adrift as you are. Yes we have seen these scenarios play out hundreds of times, but each one is different – each pet, each illness, each pet family.

Every one of us has been there. Every one of us lives in terror of the next time we will be forced to make this terrible decision, and we can only hope that we have learned from our past regrets.

When is it time? When you know it’s time, when your family knows it’s time, when your pet is afraid, in pain, bewildered and lost. It is time when everyone comes together and says it is – and maybe you will think later that you acted too soon, or too late, but I assure you – you did everything you could, your pet loved you to the end; no decision is harder and no decision is ever so right as the one you make that tells you it’s time to let go.

Had my mom not spoken to me, had she decided to go ahead and put Josie down, perhaps Dr. Humphrey would have had a similar conversation with her, perhaps not. The fact is that Josie is a 14 year-old German Shepherd who has had a wonderful doggie life filled with toys and love and fun. Had my mom elected to let her go now it would change nothing. Josie would lose a few months of fading and loss of balance, and my mom would have lost a few months of her company and German Shepherd goofiness. In 14 years of joy and companionship, these months that weigh so heavily on us truly carry little weight. The decision still would have been the right one.

The good news is that Josie still plays with her collection of rocks, and still squeaks her toys. She still follows my mom out into the yard and still tries to chase the spray from the hose. She falls more, sleeps more, and can no longer get on the couch for her naps. Sooner than later my mom will have to put her down – because she can no longer stand on her own, or she becomes incontinent, or fate intervenes with an emergency, and when that day comes my mom will know that no matter how hard, the decision that she makes that day will be the right one.